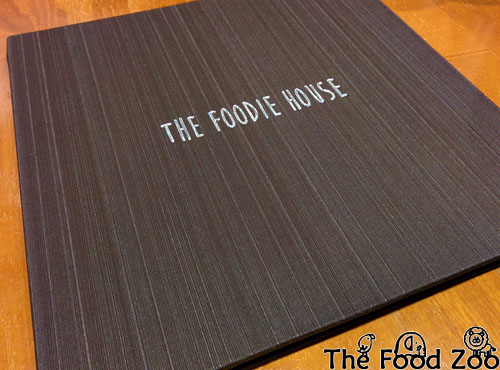 New section at Macquarie Centre means new food adventures! There’s a whole new fresh market that just opened up about a week ago, and the sight is something akin to Asia. Swarming with people, lines everywhere and invasion of personal space. At night time the bustle seems to die down a little to give some breathing space. We wondered around and settled on The Foodie House! It is a mix of Malaysian and Vietnamese cuisines. 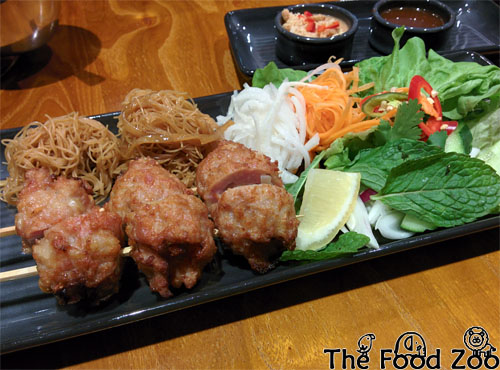 Marinated minced pork and prawn with soy sauce, pepper, garlic, then deep fried until golden brown and served with vermicelli noodle. I assumed that because of the pricing that this was a main sized meal, so when the dish came out, I was terribly disappointed. I guess even the Gods know that I am supposed to be cutting down on portion sizes. The little balls were very flavoursome and they were delightfully crunchy. They were like little pork and prawn doughnuts, and because of the hole in the middle I was able to stuff if full of pickled veggies and vermicelli. :) 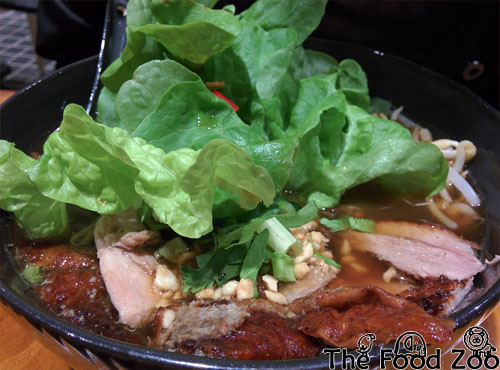 The soup was thick and full of flavour and the meat freshly sliced off the duck when the order has been placed. A sprinkle of fresh chilli into the broth and this makes for a fitting meal on a cold winters night.

There were many other awesome drinks and dishes that are definitely on the to-eat list for our next visit when the crowds die down a bit.

So this place has been around for a while but why have I only heard of it this year?? I need friends who will take me to nice cheap eats more often! This place has become one of my favourite places for a cheap, casual but satisfying dinner!

The Food Zoo experience: I have been back at least five times and left feeling full and satisfied every single time! There is also rarely a queue since it has huge downstairs seating too. I love the Hainanese chicken (probably not the best or cheapest in Sydney – but I’m easily satisfied). I would also recommend the roti canai with condensed milk to finish off the meal (although it’s not in the pictures above). Tip: Restaurant takes CASH only! (Well I think you should really be expecting that from an Asian restaurant anyway!)

This post was supposed to be up a while ago, but my awesome meal was followed by a not so awesome car crash ): With the poor girl needing to be put down.
But in any case, I’m sure Mamak does not need an introduction, nor do I need to remind everyone how good the roti is. I’d only ever been to the shop in the city once, when I was roaming the streets at 2am on a Saturday night during my ‘younger’ party days, and even then I just watched as others wolfed down the food. The lines were always too long and parking too difficult to come across in the city. So when I heard that Mamak was opening in Chatswood I had to go and give it a real try. I went there three times the week that it was opened. No obsession there.

Kari sayur, $13
Vegetarian curry cooked with lentils, fresh tomatoes, carrots, potatoes and eggplant.
I love tomatoes in curry! They’re so juicy and melt in your mouth :) and this was a nice mild curry.

Nasi goreng, $10.50
I eat nasi goreng way too much, but this one was light and not as greasy as the ones I usually buy.

Roti planta, $6
I forgot to try this one, since I was too busy waiting for my roti canai to arrive ):

Nasi lemak. $7.50 + curry chicken, $3
Getting curry chicken is definitely a much better idea that the first time I came, and got the fried chicken. At least the curry chicken gave it some sauce so the rice wasn’t so dry. The vegetarian curry also helped :)

Roti canai, $5
Yay, this is basically the only thing I order when I go to Mamak, since I need to save room for the roti tisu :D

Chicken + beef satay, $14/doz.
I wish I’d gotten a better picture of the satay sticks but they were at the other end of the table and I was too busying digging into my roti, and I’m some what ashamed to say, I don’t eat/enjoy satay anything. ):

So yeah, if you’re not into long lines, the Chatswood Mamak is the place to go. But just to be safe, get there early anyway :P

..and now back into my hole to study.

There was an error retrieving images from Instagram. An attempt will be remade in a few minutes.